Robert Kinderman came back from the dead. His story made national headlines in 2016 when first responders performed CPR for an astonishing 73 minutes, after Mr Kinderman suffered a prolonged cardiac arrest at just 59 years of age. Reunited in Melbourne this week with Dr Dion Stub, the interventionist cardiologist whose groundbreaking treatment saved his life, Mr Kinderman said “every day is a miracle.” …  Read Full Article

Is there an alternative to opioids in suspected ACS?

Can you sum up the aim of this project in 10 words? To determine whether lignocaine is an effective and safe alternative analgesic agent compared to conventional opioid therapy in patients with suspected STEMI. What have you discovered in this area in the past? That long held notions of first line management in STEMI can … Read Full Article

Cardiologists want more people with a life-threatening problem to be able to access an alternative to open heart surgery. The procedure can be done while a patient is awake, but at the moment it’s only available to select people. 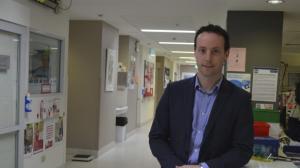 Cardiologist Dr Dion Stub says he usually treats his patients’ heart attacks by opening the main artery on the underside of their forearms (the radial artery) and running a catheter through to the heart artery. Read Full Article

WATCH: Study could change how heart attack patients are treated

A new study led by a Vancouver-based doctor could change the way heart attack patients are treated around the world. The research says a common practice dating back 50 years may be doing more harm than good. Read full article

Karl Kern, MD interviews Dion Stub, MD about the results of the AVOID trial, which were presented at the American Heart Association Scientific Session 2014 in Chicago.